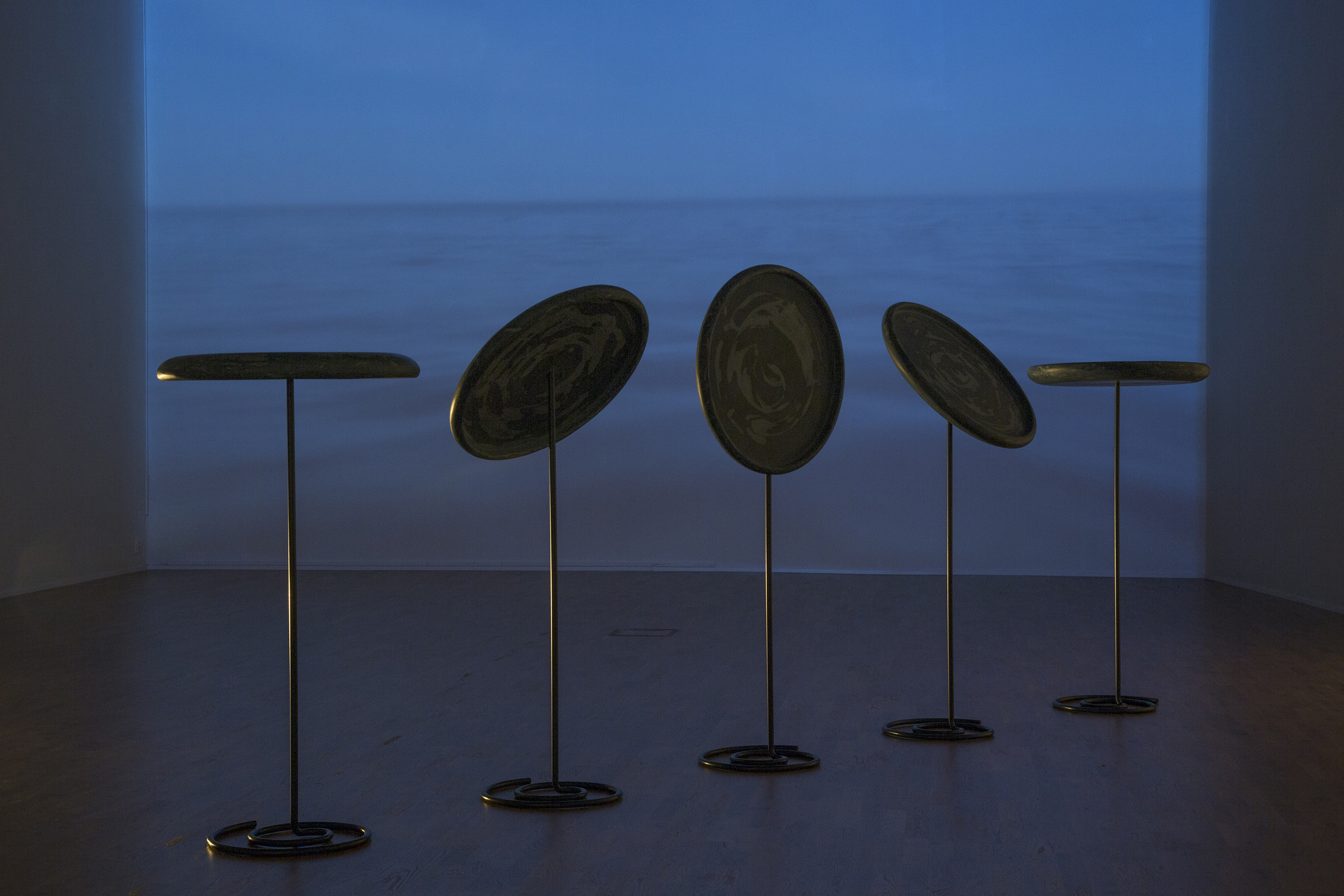 The Frisbee Perspective was a solo exhibition at Sogn og Fjordane Kunstmuseum in 2018 consisting of a video piece, rocket side panels from Mad Mike’s self made rocket and frisbee shaped sculptures lit up by a single lamp custom built for the space.

Click here to read a text by Hans Carlson written in the occasion of the exhibition.

Click here to hear a radio interview about the exhibition in Norwegian.

The difference in scale between the planet we live on and the bodies we inhabit is so great that the shape of the Earth is beyond the body’s capacities to grasp. Most of us rely on technology, abstract reasoning, scientific authorities and trust in these to arrive at the conclusion that the Earth is in fact round. Others, such as the rapidly growing Flat Earth community, don’t. They consider the round earth theory to be a global conspiracy and believes that the Earth is shaped like a frisbee.

One of their well known representatives, daredevil, stuntman and DIY guru Mad Mike Hughes was not convinced of neither flat nor round earth theories and wanted to go up into space himself to see with his own eyes what shape the Earth actually has. Not only did he want to see this with his own eyes, but also to build a rocket himself, in which he could perform a series of stunts to fundraise for his future space travel. In 2018 Mad Mike successfully launched himself 500 meters into the air in his home made steam powered rocket over the California desert, broke world records and made international press. To fundraise for his actual space travel he sold the side panels of his rocket before building a new one, and they were bought to be included in the exhibition The Frisbee Perspective.

One of the rocket side panels were installed on the wall with the other one hanging from a single wire some distance in front of it. Air flows from by people circulating in the space caused the the wire-hung panel to rotate, occasionally obscuring the light from the wall mounted panel. The sporadically occurring eclipses refer to how the lunar eclipse is being used as proof for theory by both flat earth and round earth believers. The title of the rocket panel installation «Opplysninga, Formørkelsen» can not precisely be translated to English, but means something like «Shedding light on/Enlightenment, Darkening/Eclipse».

Frisbee shaped sculptures were placed in different angles relative to the single light source, casting stark shadows that were part of the sculptural compositions and at the same time showing how ones own placement in relation to something defines how we see it.

The video piece The Distance to The Horizon was projected on one end wall of the space and documents a journey at sea which aims to convey a more direct feeling of the curvature of the Earth by traveling the calculated distance to the horizon. The simple mathematical formula d=√2hr was used to decide how far to sail in the boat with «d» indicating distance to the horizon, «h» height above sea level and «r» Earth radius. The constantly forward moving horizon in the video mirrors the impossibility of actually calculating this distance accurately; Height above sea level is constantly changing while sitting on a boat, the exact Earth radius varies from place to place on the planet and must be approximated with an average Earth radius, the 30 year old boat engine will not maintain 100% stabile speed and atmospheric refraction is ignored all together. The simplified abstraction will always be an approximation.

After the opening of the exhibition Mad Mike was invited to Aldea to run a workshop in rocket building. During an unsuccessful rocket launch in 2020 he tragically lost his life. 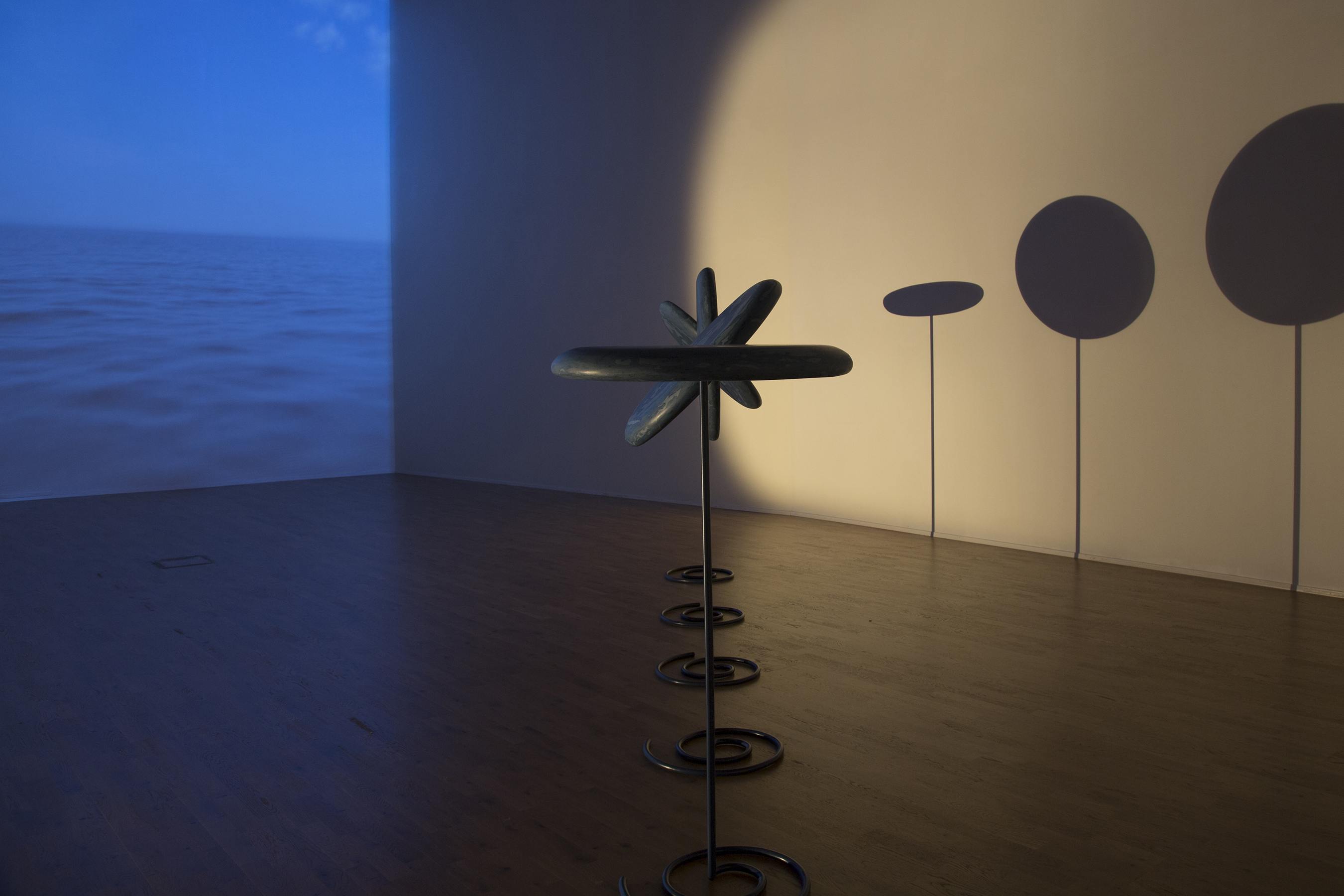 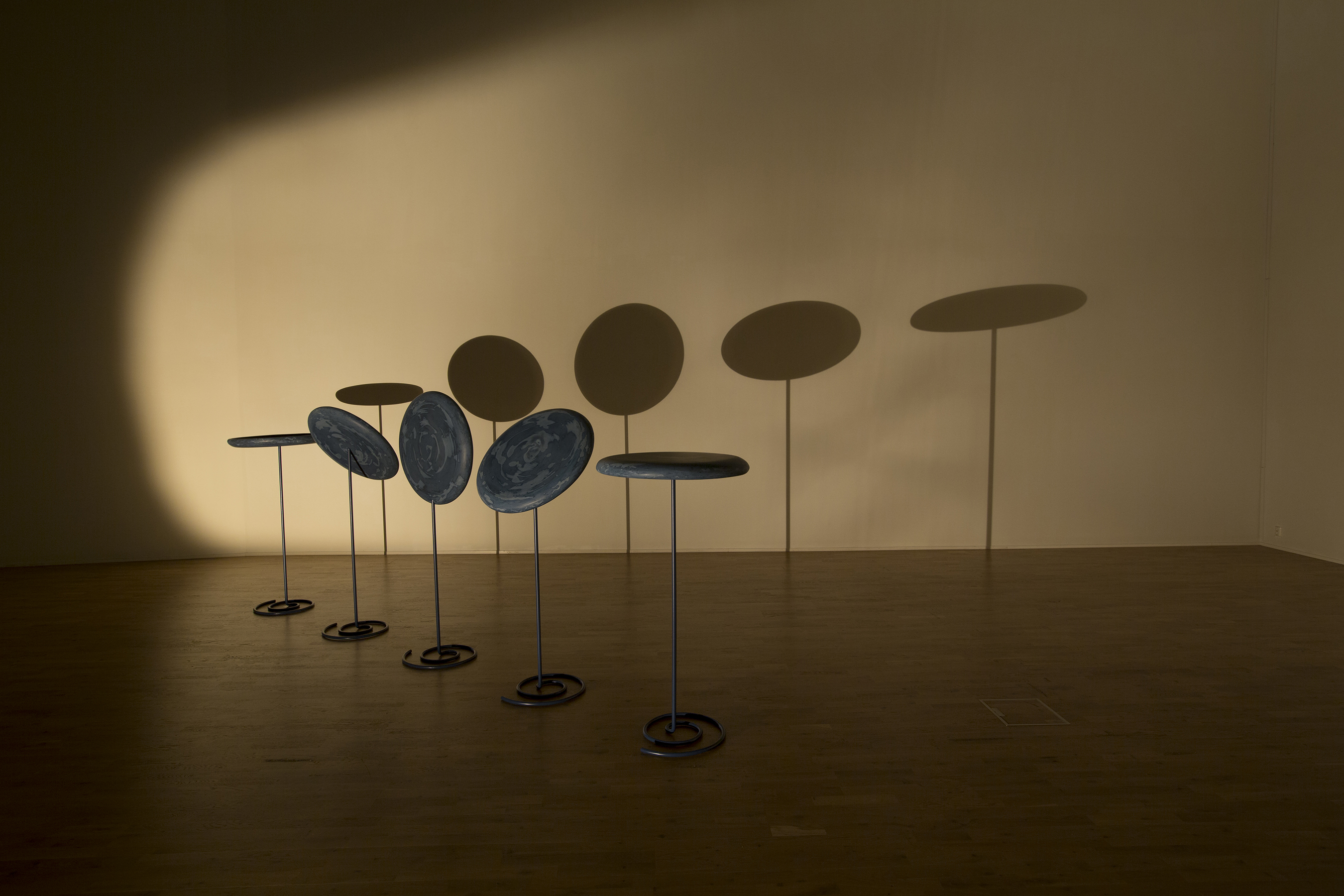 The sculpture series The Frisbee perspective was made from powder coated steel stands and and jesmonite discs. The discs measure 60cm in diameter 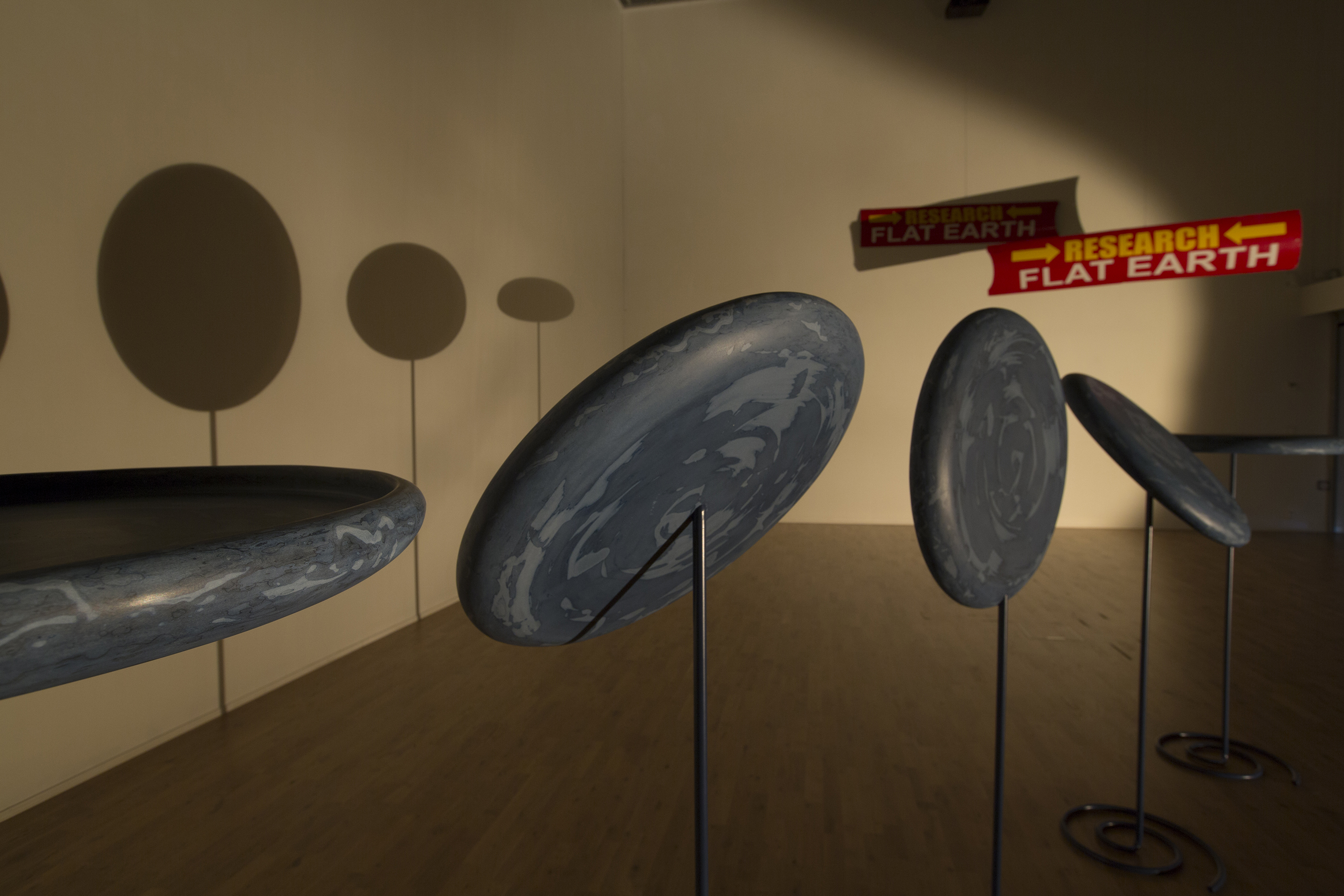 One single custom built lamp lit up the space 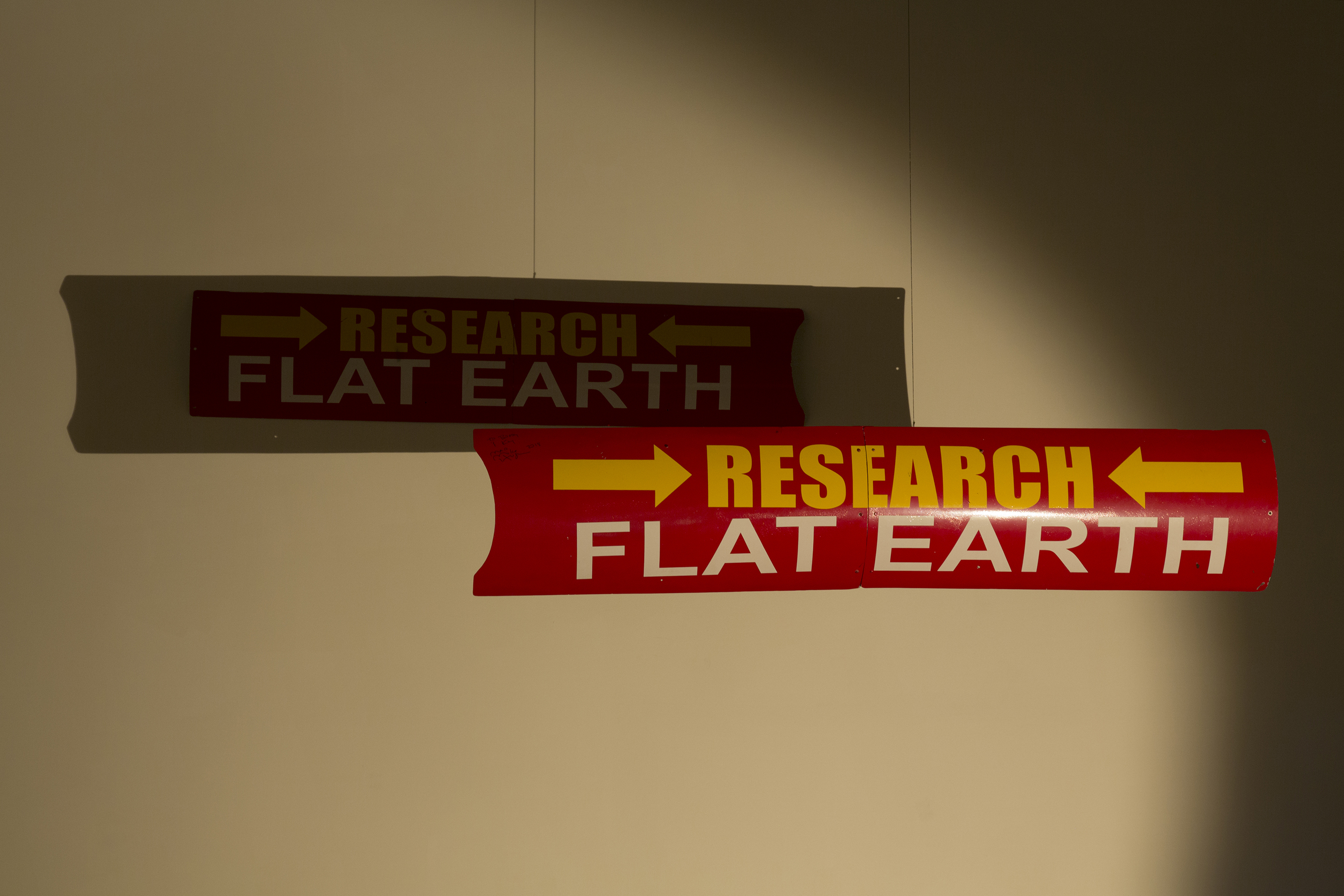 Side panels from Mad Mike's rocket 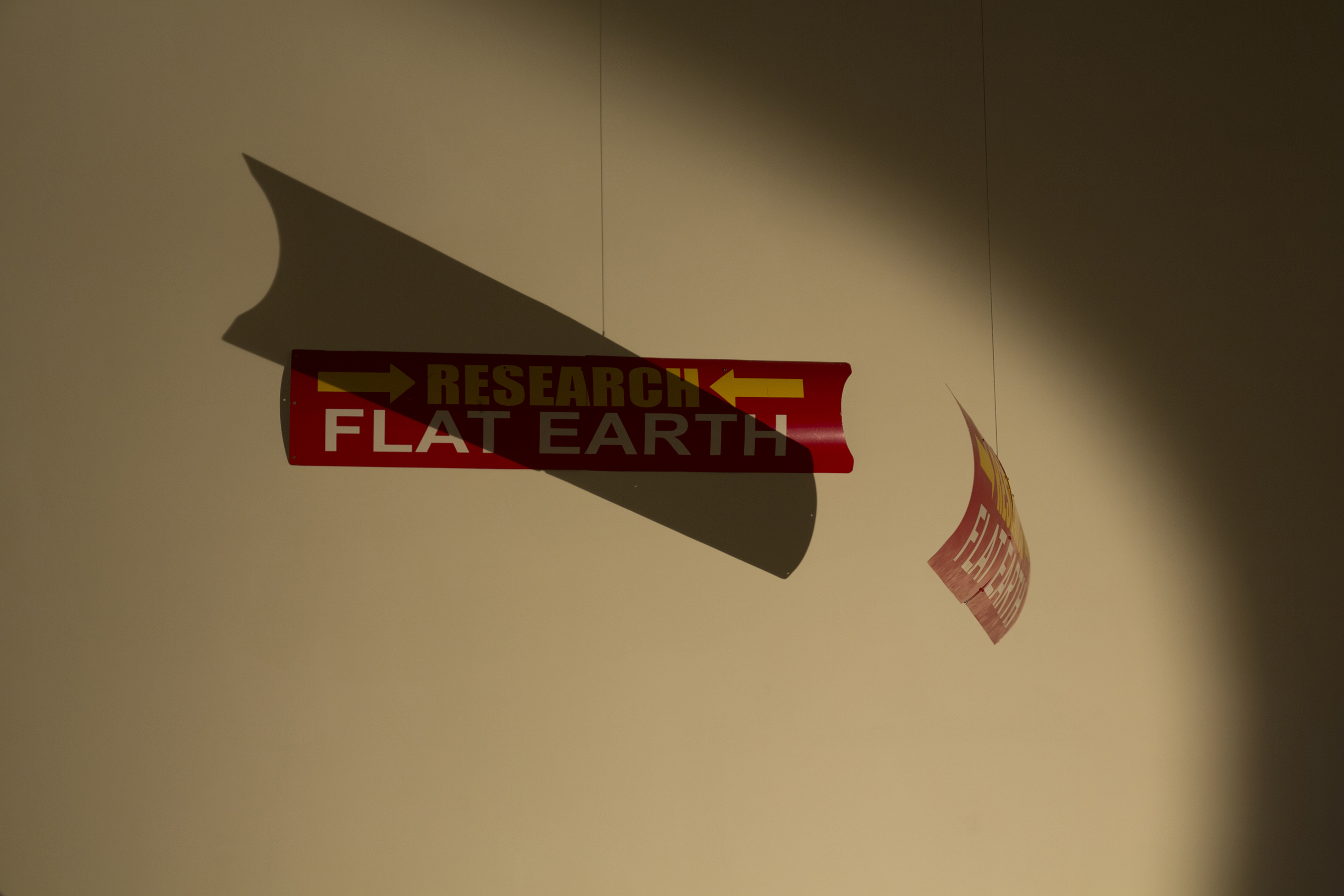 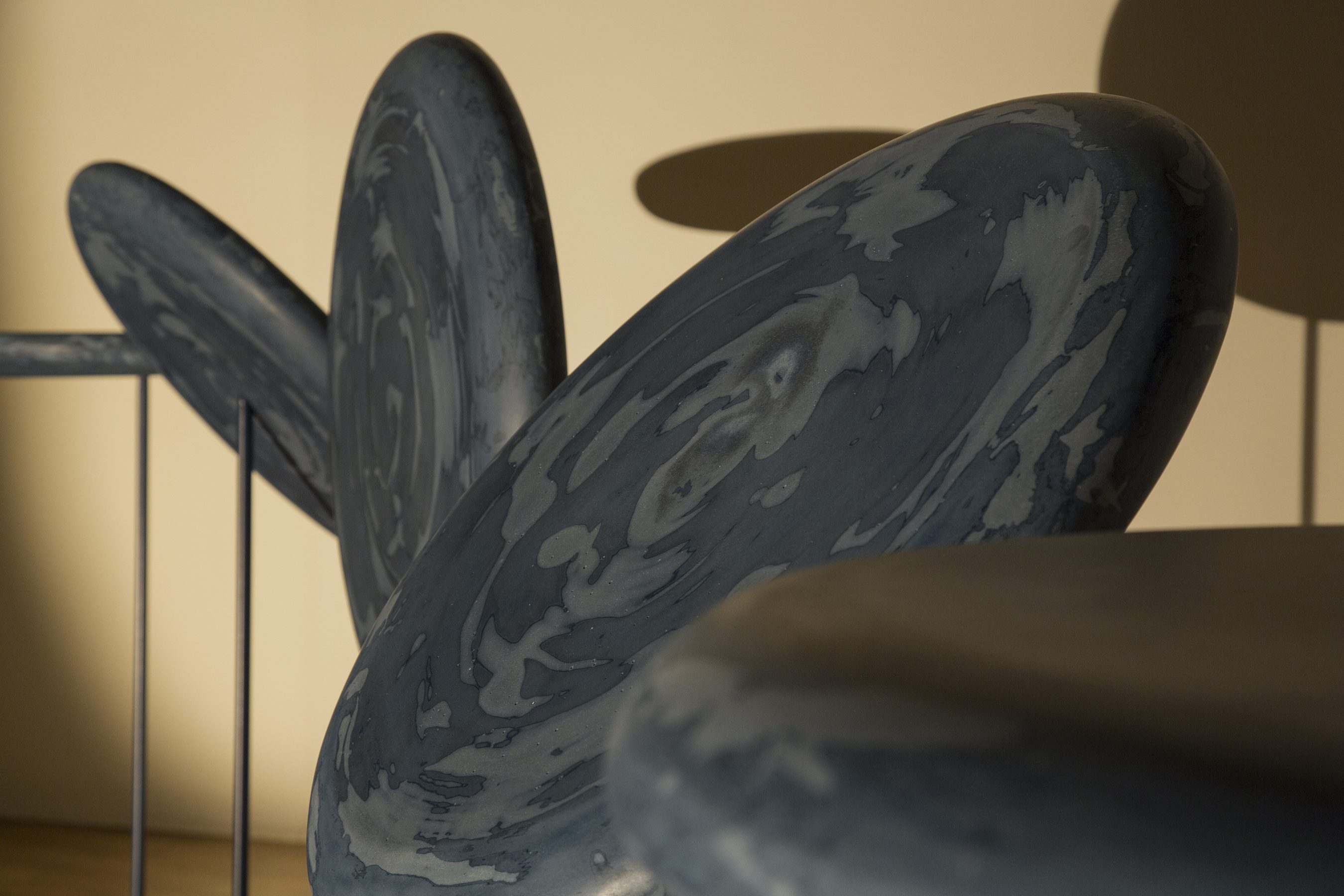 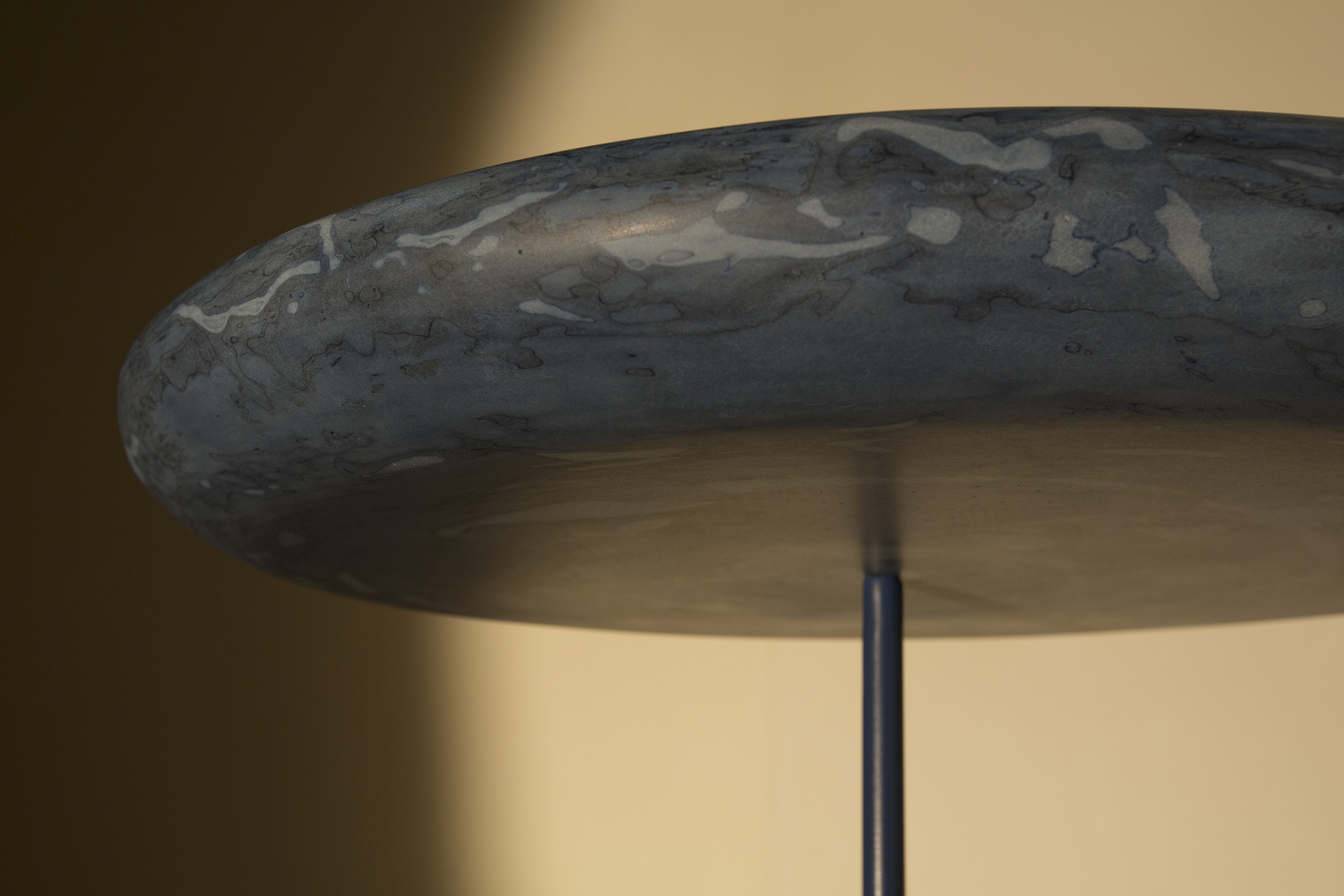 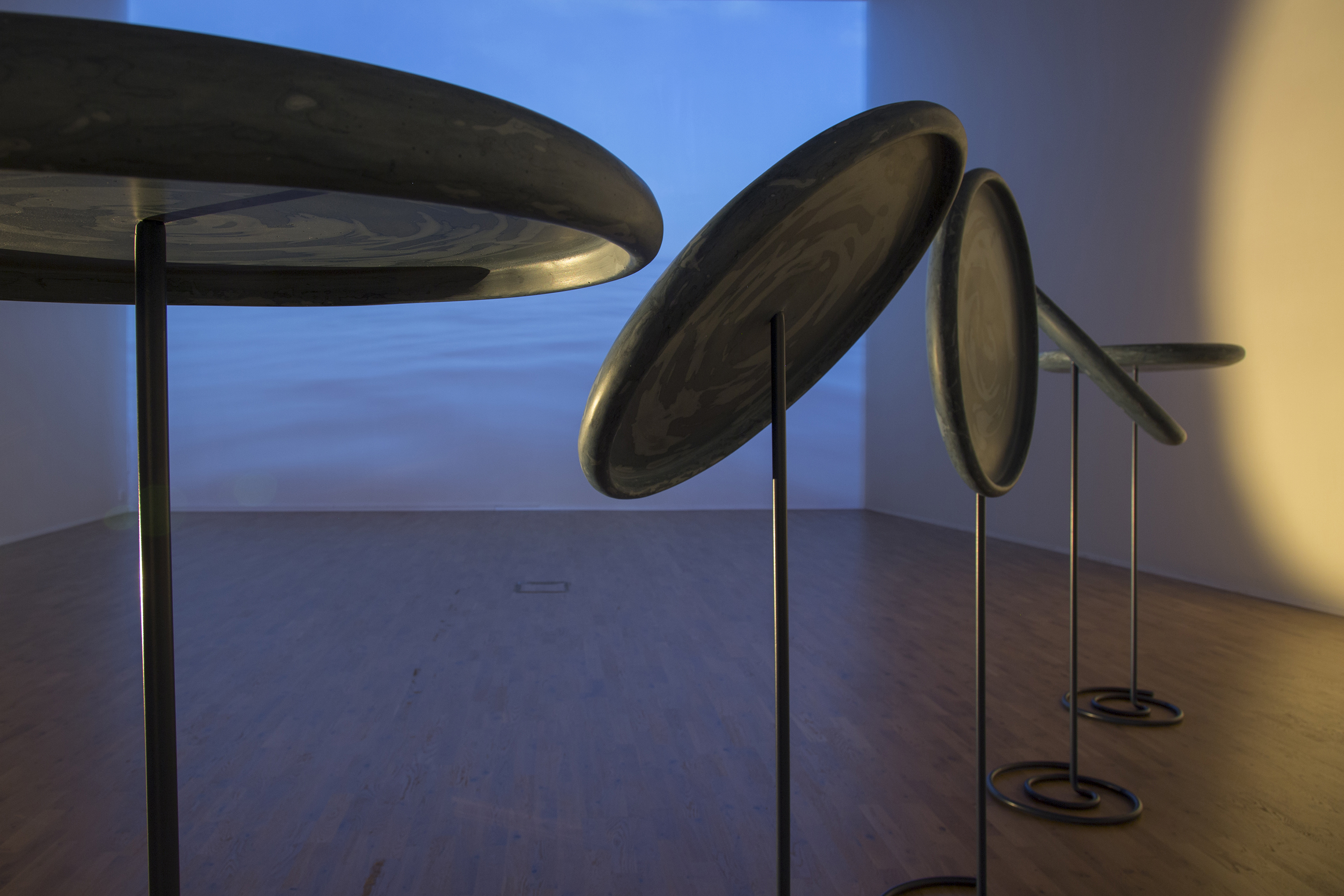 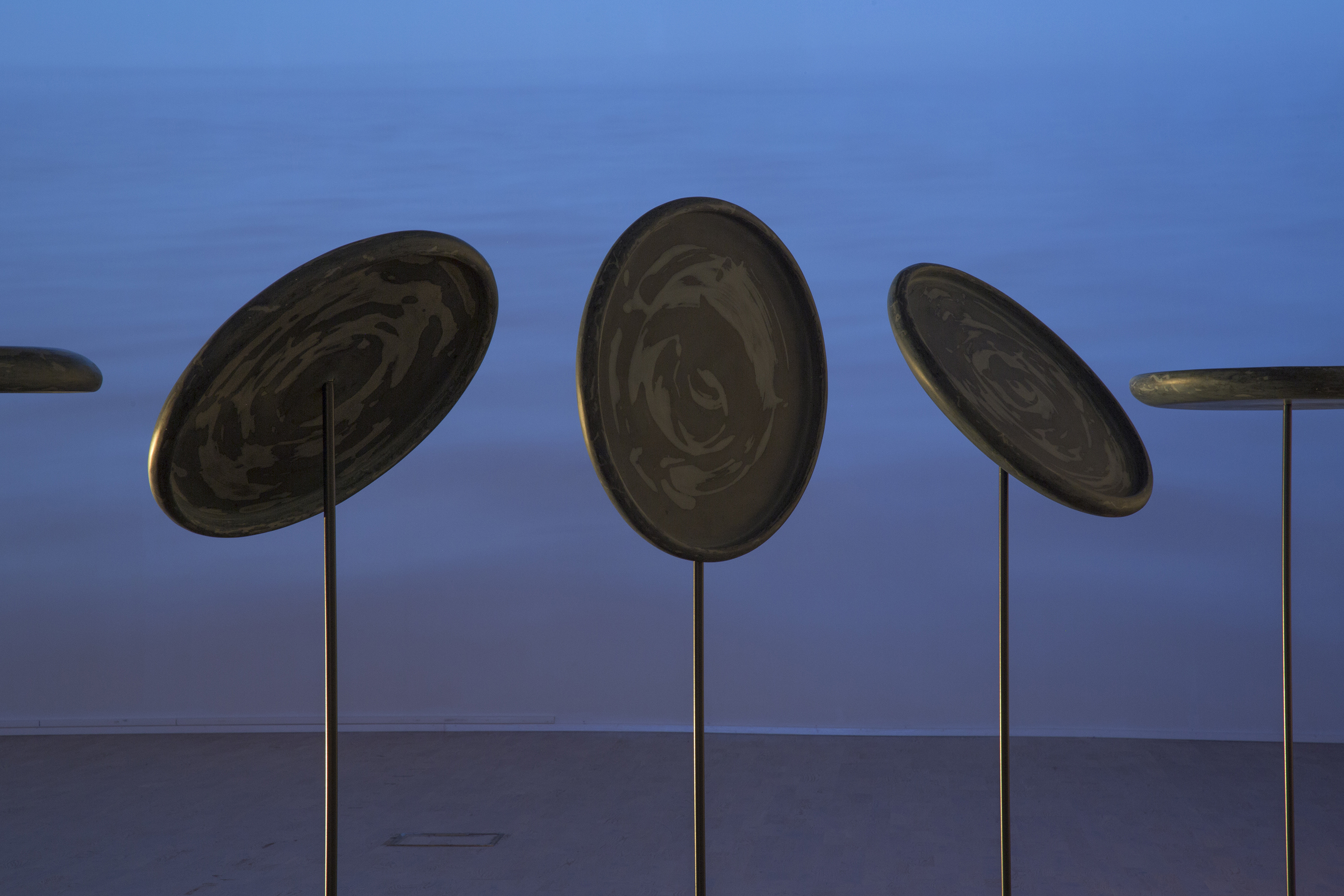 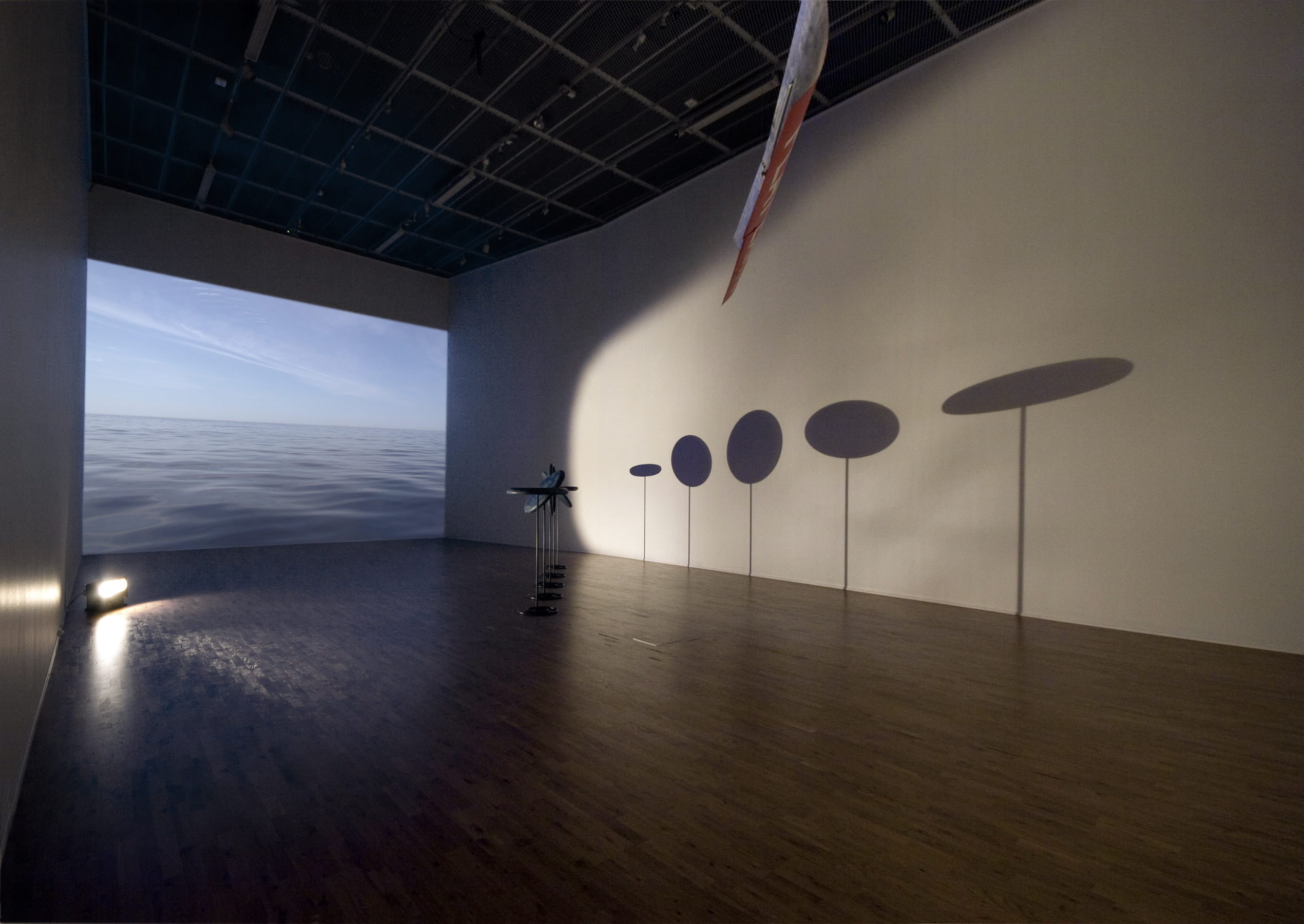 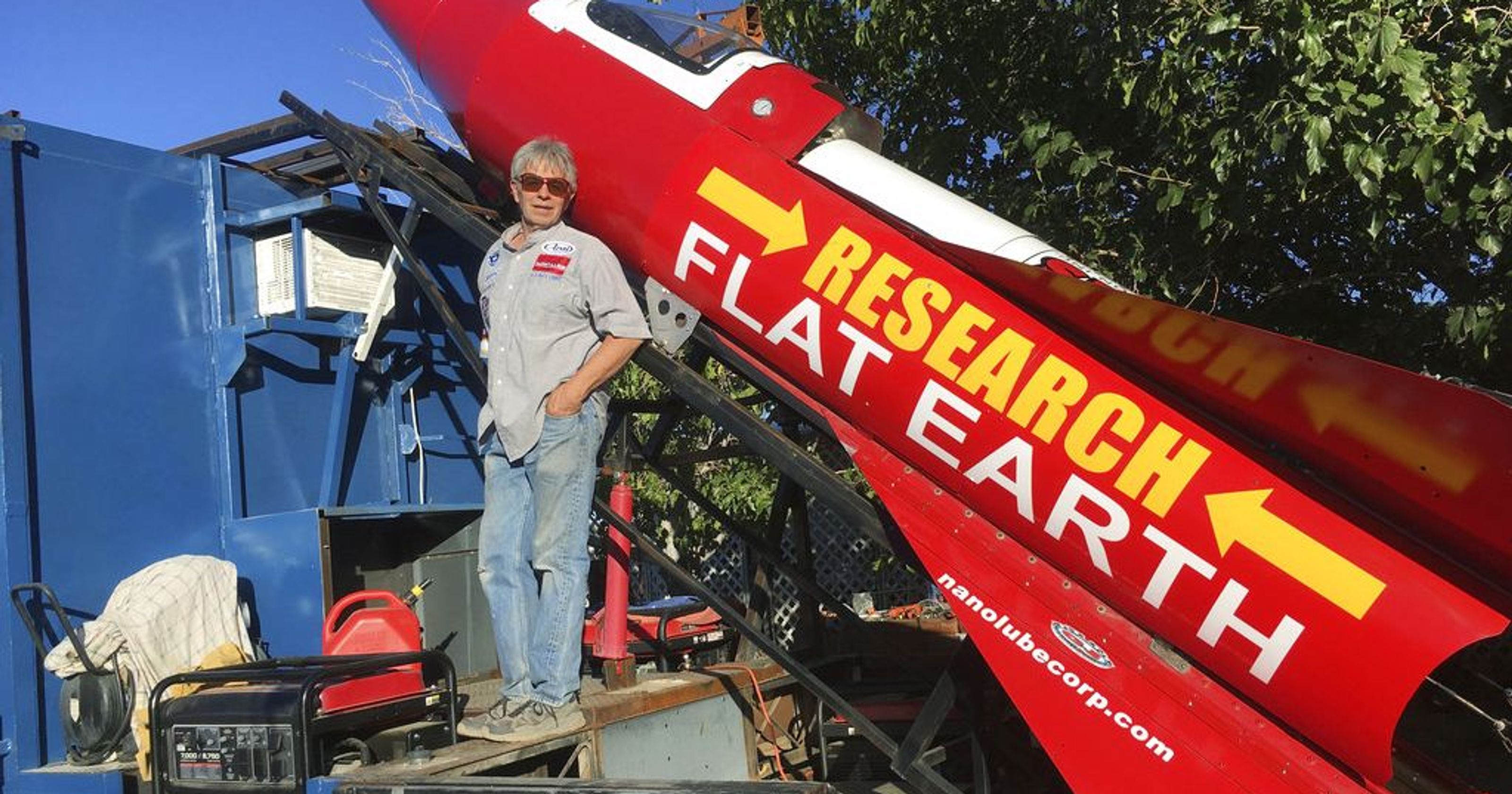 Mad Mike posing with his self built steam powered rocket, sponsored by the Flat Earth community